Camping with a Newborn 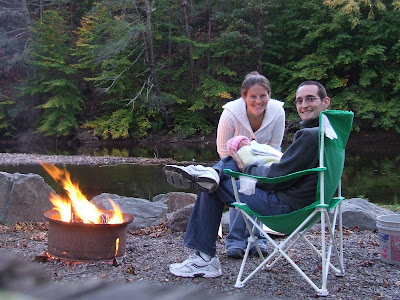 We stayed at Camp Carr until October 22nd so Lily  had lots of beautiful fall days by the river. Chris and I enjoyed sitting under the awning in our folding rocker with Lily all bundled up in our arms. We took regular walks around the neighborhood and met lots of nice campers who came in each weekend.

You may ask how we are managing to function in a camper with a newborn. Here's the rundown: 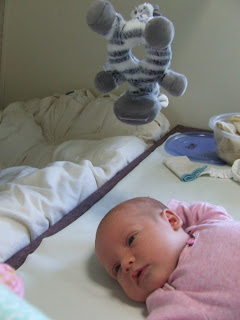 Diapers--we used disposables for about four days then switched to Gdiapers size extra small with flushable/compostable/landfillable liners. These proved to be a great choice. We set up a changing area on the guest bed in the front of the camper. There is a twin bunk with a queen bed underneath. We removed the twin mattress, put it on the front half of the queen, and put down a plastic mat. We kept a basket of necessities next to the mat and clothes in a drawer below the bed. We keep a stack of wetted hemp wipes in a tupperware bin and put dirty ones in a three-gallon bucket filled half way with water and three drops of tea tree oil. Any Gpants that get dirty get rinsed in the toilet then go in the bucket as well. Recently, we removed the queen bed entirely and set up a new changing table configuration that is a better height for us. This afforded us more floor space which has been awesome. 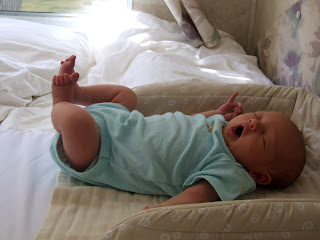 Sleeping--Lily sleeps between us in a product called the Snuggle Nest. It's basically a three-sided guard to keep her from rolling into our pillows. We love having her right there with us; it's easy to quickly meet her needs and calm her when she needs help. We read a great book with an odd title called The Happiest Baby on the Block by Harvey Karp which teaches parents the 5 S's...Swaddle, Side/Stomache, Shoosh, Swing/Rock, Suck. These have proven to be awesome tools for Lily. We swaddle her each night and often use side positions, swinging motion, and loud shooshing to calm her when she has trouble getting to sleep. She's been an excellent sleeper so far going three to five hours at a time throughout the day and night.

Bathing--Initially we just did what the Brits call top 'n tail. A damp washcloth for her face then a damp bum wipe for her bottom. Once her cord fell off around 1 1/2 weeks then we began using the bathtub. I had a no-slip pad from my horse that works well on the bottom of the tub. With two inches or so of water in the tub, I would sit on the seat (1/2 of the tub is a seat) with my feet on the mat. Chris would kneel on the floor and hold Lily's head while I washed her up with our Shea Butter soap and water. Now we can do this with just one of us kneeling holding her head and washing her. 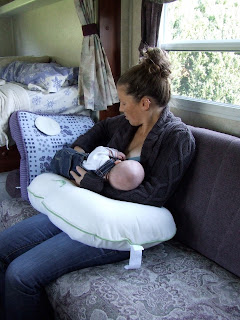 Feeding--Right from birth Lily has latched on like a star. I typically sit on our couch with pillows behind me, one under her, and my feet up on the dinette seat. Recently, I broke down and bought a Boppy which has been an excellent help to my upper back. Lily also enjoys tummy time on it and it makes a comfy recliner for her. I am so grateful to be able to feed her the food nature intends for her. I have pumped a couple bottles for Chris to feed her from as well which is a really special event for him and Lily. 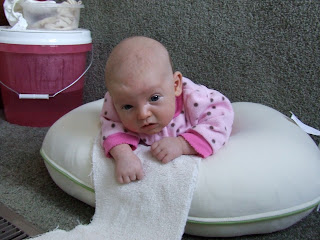 Laundry--Thank you John and Dolores (in-laws) for the use of your awesome High Efficiency washer and dryer. We take advantage of that gift just about every three days.

All in all, it's not that much different from a regular house...just a bit smaller!

Families On the Road

Families On The Road